“Sheer chance is better than no chance” probably bounces around the mind of every last person playing the lottery in America. With the Powerball in the eastern states reaching totals over $300 million, one can’t help but buy into the 1/600,000,000,000 probability.

Even among those select few who happen to win the entire jackpot, however, there are just, well… idiots. Jack Whittaker, who took home $113 million after buying the lucky numbers in 2002, proceeded to lose his family, store $500,000 in cash in his car (naturally, he was mugged and the money was stolen), and have problems with drugs.

Japan, as a cash-based society when not relying on electronic transfers, may not have too many Jack Watanabes doing something so foolish, but the superstitions and mentality surrounding the numbers racket are practically the same.

In Tanegashima, one of the larger islands in Kagoshima-ken, a two-headed snake was discovered, bringing hundreds of Japanese visitors revering the snake as a good luck charm for the upcoming jackpot.

If you’re from a country that is intelligent enough to spare its citizens from this particular form of gambling, take heed:

Most supermarkets have a lotto booth next door or attached to the building – look for the manekineko (招き猫, beckoning cat). 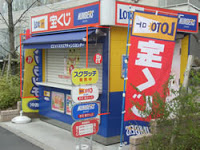