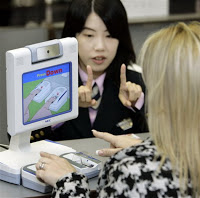 When in the course of human events it becomes necessary for one people to dissolve the natural ties which have connected them with others and to assume among the powers of the earth, the separate and equal station to which the laws of nature and of their own unique God entitle them, a decent respect to the opinions of mankind requires that they should declare the causes which impel them to the separation.

We hold these truths to be self-evident, that all Japanese are created equal, that they are endowed by the Son of Heaven with certain unalienable rights, that among these are being recognized as Japanese, being considered able to use chopsticks, and not being marked as a criminal solely based on race. That to secure these rights, governments are instituted among men, deriving their unjust powers from the apathy of the governed. That whenever any Form of Government becomes destructive of these ends, it is the Right of the People to accept that nothing can be done about it and shrug “shouganai”…

I walked into the immigration section of Narita International Airport with my arm in a tattered white sling, a backpack strap weighting my chest, a laptop case slung around my neck, and my left hand supporting a large green piece of luggage containing gifts, clothes, and $0.83 American. Physical state.

Psychologically, I had just gotten out of the hospital, had shattered my first bone and was concerned about a full recovery, was emotionally exhausted from a night layover in Tokyo and pondering the welfare of the family, and knew I now had to face the arduous task of dealing with bureaucratic officials and filling out paperwork when I was incapable of writing.

Fortunately, the lines upon lines of starry-eyed Japanese and foreigners heading towards the black overhead signs were not meant for me, or so I thought. Stealing a sideways glance at the hoi polloi, I followed the green arrows boasting “Automated Gate Registration”.

Paperwork in hand (having completed it before my accident), I was somewhat confident that I could handle this with my arm tied behind my back… or front, as the circumstances dictated.

My file was being created, and everything was going smoothly until I tried to give my fingerprints…

Keep in mind that my right arm was weighed down by a large fiberglass cast extending under the elbow, which contained a very fresh fracture. My fingers didn’t like what I was doing, and must have rebelled by losing their natural oils and surfaces. What followed was:

“I have to do it today; when I return, I have to get from Narita to Haneda in three hours.” (presented copy of schedule)

“All right, I understand. Please read this later.” (presented copy of Re-Entry Japan’s tract to protest the biometric filing of foreigners

I turned my back before the tract could be refused or discussed (I wanted them to think about what they were doing, not engage in a long debate while my flight departed). A few minutes later, as I stood in the “normal” lines awaiting the customary stamp and head nod, I saw the official I had been speaking with look right at me, talk to his supervisor, and laugh.

My arm still hung in a sling, though this one was composed of a more durable, navy blue fabric. My exhaustion was roughly the same on account of a five-hour delay in Chicago.

Trudging through the terminal, my head still swimming with images of animated characters and time machines (thank you, in-flight entertainment), I was too numb to care about issues like racial discrimination and terrorism. All I wanted to do was sleep and forget about life.

My cast had been swabbed four times this trip, to determine if I had masterfully sculpted a hand-shaped plastic explosive. I had missed my flight to Kagoshima, and was faced with the task of learning just where (or if) JAL had arranged a hotel room.

Short line at the “Re-entry Permit Holder” sign. Prints accepted the first time, the tract cheerfully discarded by the official.

While waiting for my baggage, a friendly woman approached me with hotel and meal ticket information, including the shuttle bus schedule to Haneda. Success.

As I prepared to exit customs with a blank declaration form, the officer looked at my arm, waved me through, and said in English “next time”

– Fingerprinting foreigners exclusively is racial discrimination. There’s nothing to debate there.
– I see liitle point in fighting the fight with border officials, as they’re already overworked and feel less than appreciated; this matter should be appealed directly to the Ministry of Justice.

I wasn’t exactly unbiased going out and back, but even after a relatively painless screening, I still believe this new policy is blatantly discriminatory, marking foreigners as potential criminals before they’ve even entered the country; in the case of permanent residents, it’s absolutely absurd.

I won’t be fighting from down here, but I will spread awareness as best I can, and keep an eye out. Again, if you have had any interesting experiences at Narita, Nagoya, or Osaka, please email me and let me know where you stand on this issue.