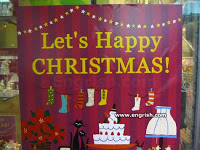 Listen, dad, if you are are going to say naughty things in front of these American girls then at least speak English-English.

Alright my son, I could’ve had it away with this crackin’ Julie my old China.

Are you telling a bunch pork-pies and a bag of trout? Because if you are feeling quigly why not just have a J. Arthur?

What, billy no mates?

Don’t you remember the crimbo din-din we had with the grotty Scottmen?

Oh, the one that was all sixes and sevens!

Yeah, yeah, she was the traveling strife of the Morish dancer what lived up the apples and pears!

If you’ve lived in Japan long enough, or spent enough time searching Japanese job websites, you might have noticed certain employers will specify the type of teacher they want in the classroom.

– Do you look Japanese?
– Oh… sorry, you must have blonde hair and blue eyes, not green.
– Are you British, Australian?
– What state are you from?

When I was first being interviewed over the phone by an AEON rep from Chicago, one of his first questions was my point of origin. Although he might have just been making casual conversation, my mind was tuned to an “ESL mode”, and I considered the basis of such an inquiry. Texas, Texas… let me think. We’ve got the BBQ, we’ve got the Mexican food, we’ve got the insane pride, we’ve got Lance, and, oh yes, we are one of the few states to acknowledge these with anything other than a “huh?”:

“If a frog had wings, he wouldn’t bump his butt when he flew”

…I’ve even been known to say “you’re real purdy” on the few occasions when I feel my southern boy charm will hit home.

The point being, English is not necessarily what we perceive it to be. Who are the word police, the “wordanistas” if you will, to tell a Japanese person that his shop sign stating “Let’s Happy CHRISTMAS!” is wrong? If he wants to call it English, that’s his right! And may he gain foreign customers by charging them to take pictures!

No one can tell you your style of speaking or your dialect is wrong for any position, because English reaches as far in variation and style as any other language on Earth. Did you know everyone in the world originally spoke English? Look it up. Now, somebody’s gonna say “I did look that up and it’s not true.” Well, that’s because you looked it up on an English website with recognizable text. Next time, try making up a word to prove your case:

Oldspeak-noun The English language as originally spoken by the gods, passed down to men to be eliminated by attrition

My interpretation of English tells me that’s how the language works.

The Englishiness of the matter is… anyone can teach English to you, I promise to communicate English as if it doesn’t concern you.

Let your friends have a butchers at this, so they can have the wood on others and share a sixty-sixer to feel right as rain.