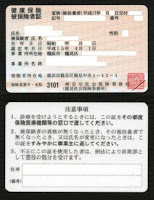 Every person regardless of nationality over twenty years old residing in Japan is required to be enrolled in a:

Back to basics: the insurance system in Japan, depending on the size of the company in which you’re currently employed, falls into two categories. If you’re with a company that employs more than five people, you must pay under the Social Insurance system (shakai hoken, 社会保険).

Under the Social Insurance system, we have:

Eikaiwa employees and those teaching English in Japan

Be careful what you sign up for. I know if you’re first coming to Japan, you’re busy settling things at home, getting the visa paperwork taken care of, and learning about the job and country, but pay attention to the fine print

Last year, AEON gave its employees an option: continue working 29.5 hours/week and accept the fact you have minimal emergency insurance, or convert your contract to a 36-hour working week and pay into the shakai hoken health insurance and pension system.

I came into AEON and Japan in complete ignorance about the health care system. Complete – unknowing, uncaring. After all, I’m immortal, aren’t I?

For some years, AEON had its employees working 29.5 hours a week. Why not round up to thirty? Because they didn’t want the extra charges of paying into the employee insurance system:

“According to the Health Insurance Law and Employees’ Pension Law, companies must enroll all workers who work more than 30 hours a week and who have been in Japan for over two months in both the health insurance and pension systems. No exceptions.”

Under the shakai hoken, you pay 50% of all premium costs monthly, and the company pays the other half. By keeping employees on a reduced workweek, AEON was sneakily avoiding its responsibilities to both the government, and the working foreign “teachers”. As I mentioned in my “The Truth About AEON” posts, management was willfully ignorant of just how corporate headquarters chose to circumvent the law

…working hours. 29.5. Why? Because, according to Japanese law, if you work over 30 hours you are a full-time worker, and entitled to full-time benefits (and on the reverse, different taxes, of course). Still, management just stared me in the face when I explained this to them.

“According to Japanese law, I am a part-time worker.”
“No, you are not. You are full time teacher.”
“No, not according to the law.”
“Why are you saying this?”

Because it’s important for all parties to understand that. No amount of insistence or stubbornness will change that fact. And if I am a part time worker, I should not be coerced into working extra hours unless you want to face the consequences of employing me as a full-time worker.

Other part-time workers in Japan have had it much worse; everyone knows unpaid overtime is as natural as having black hair in Japan. Some were working 40-50 hour/weeks while still under a part-time contract. No health insurance. Part-time wages. No assistance for childcare. There have been some attempts to improve this, but I believe it’s still rather rampant.

Let’s Japan.org discussion of this issue

What does the kenkou hoken cover?

– 70% of all medical costs
– 60% of salary from lost days (beginning from the third day absent from work due to injury or sickness)
– High-cost medical expenses cannot exceed about 80,100 yen/month
– 0% interest loans are available

You can choose to withdrawal a portion of the pension you have paid into, proportional to the amount of time you have spent in Japan (see details here, under “Lump-sum Withdrawal Payments”). To qualify, you must have lived in Japan and paid into the pension for at least six months; the return must be filed within two years of your departure from Japan. The application form (only applicable for foreign residents of Japan) is here

“You can file for a refund of up to 90% of your contributions provided you’ve been contributing for over 6 months but stay in Japan for less than 3 years.”

The refund is calculated by taking your average monthly remuneration over the time you paid into the pension and multiplying it by the benefit rate:

If your final month paid in the employee pension fund is between September 2007 and August 2008, and you have lived in Japan for (benefit multipliers):

A refundable 20% withholding tax will be deducted from this total. The tax can be recovered however, minus a fee, by signing up with a tax agent before you leave Japan.

If you are self-employed, in a company that employs fewer than five people, or in a different situation entirely (unemployed, student, retired, long-term traveler, etc) you might consider signing up for the National Health Insurance system of Japan; there are alternatives – see “Insurance through Private Companies” below.

Under the National Insurance system, we have:

What does the kokumin kenkou hoken cover?

Practically the same benefits as the shakai hoken system, with the exception of:

– Not being paid for lost time at work (if employed at a company)
– A smaller cut-off for high monthly medical expenses (i.e. you pay more)

Unlike the shakai hoken, the National Insurance System premiums (monthly payments) are based on your previous year’s salary.

Thus, if you are new to Japan, the government does not consider your employment status from the previous year, and you pay the monthly minimum. If you choose to stay a second year, you may notice your paychecks will be substantial smaller, due to the national system now having some data on your salary.

If you stay in Japan without paying into any insurance system, and then try to register with the kokumin kenkou hoken, you will have to pay retroactive from the moment you entered the country. It is illegal to be a resident of Japan without having some kind of health insurance and a pension.

If you’re not planning to stay in Japan long-term

The same procedure can be used to get a lump-sum withdrawal of the money you’ve paid into the pension (dattai ichijikin, 大体一時金). However, it’s calculated differently:

No withholding tax is taken from the national pension withdrawal.

“The National Health Insurance is managed by ward offices in big cities and by small town government offices. Although it is a “national” insurance, each municipality is receiving funds and paying the claims. They are like a group of small insurance companies. They are all in the red. Some are just redder than others. As a result, insurance rates vary from one city to another. Even Japanese feel cheated by this disparity.”
Source:http://www.nationalhealthinsurance.jp/nhi.asp

This website goes on to point out how easy it is to be trapped in the National Insurance system; if you’re leaving the country, it’s generally not a problem, but once you’re signed up, it can be difficult to switch to a private company. Some have tried moving without forwarding their address to the insurance, leaving Japan on paper, or just presenting the proper paperwork and taking their chances:
http://www.nationalhealthinsurance.jp/getoff-nhi.asp

This is a compulsory insurance that employers are required to provide. It covers injury, sickness, disability, and death related to work, whether at the company or while commuting.

– 70% of most medical costs (and 100% of some)
– 60% salary paid for lost days (beginning from the third day absent from work due to injury or illness)
– Disability, graded according to the injury

Although employees are required to register with the shakai hoken as per their working contracts, those working freelance or at smaller companies do not necessarily have to pay into the National Health Insurance plan (kokumin kenkou hoken).

– If you are currently paying into the shakai hoken, you can choose to supplement this (and avoiding paying the 30% in the event of injury) by signing with a private company

– If you aren’t signed up for the National Health Insurance plan yet (supposed to do it as soon as you receive your gaijin card), it is possible to sign on to a private company, present proof of insurance to the government, and they should stop hounding you to enroll in their plan. However, once you are in the national insurance system, I’ve been told it can be rather difficult to escape; read some of the controversy at National Health Insurance Watch

One of the private insurance companies serving Japan is AFLAC

傷病名
Name of injury or sickness

第三者行為によるものですか?
Was the injury the result of someone else’s actions?

発病又は負傷の原因及びその経過
Describe the circumstances that led to the injury or disease (when, where, why)

期間に受けた療養に対し病院等で支払った額
During your time in the hospital, how much did you pay for medical care?

Social Insurance Agency
– The official website, listing all details of employee insurance and national insurance, and links to some of the paperwork (日本語で

Living Guide
– Very useful guide for all situations, including medical and insurance issues, in all languages

Income Tax Guide for Foreigners
– The official website of the National Tax Agency. Includes information for foreigners in Japan, foreigners working in Japan, and those leaving Japan

Legal Counseling for Foreigners
– List of legal counseling services for foreigners in Japan; on the phone and in person, pro-bono and charged

AMDA International Medical Information Center
– A good page covering the general procedures for medical care; there are links to insurance information, but the regulations are a little dated

In Case of an Emergency
Call 119 for an ambulance. Don’t forget to take your Health Insurance Certificate with you.