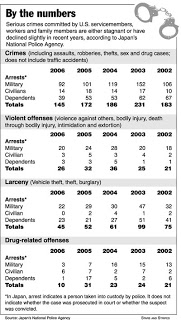 It never fails to amaze me just what kind of news stories make it through the international filters of CNN and local US stations; granted, I doubt most American citizens would be interested in a scandal involving food products sold after their expiration dates, but school bullying leading to suicides? The kind of statements politicians get away with over here? More to the point, the behavior of the military of the United States government…?

…honestly, I’m amazed people are able to publish a story like that. Military crime is down. So what. It’s not supposed to exist in the first place. If a country can’t rely upon its citizens charged with the greatest responsibility of protecting it (however you may disagree it’s implemented), then quite frankly, no one in that military or the country itself has any moral ground to stand on.

…from 2002 to 2006, there were fewer rapes, robberies, thefts and drug cases involving U.S. servicemembers, family members and civilian workers.

Excellent work, servicemen. Fewer of you have raped, pillaged, and plundered than in the past. You’re right up there with the legions of Rome and the forces of Alexander the Great. So much progress in two thousand years; I can hardly believe it. You alone have managed to prove your civilized behavior by not raping every woman you see, beating the first man who looks at you the wrong way, and stealing everything in sight. Clap. Clap.

In one of the more ironic twists in news history, a Marine stationed in Okinawa was arrested for raping a 14-year-old girl. Less than 24 hours after the decrease in military crime story was released.

[The Marine, Staff Sgt. Tyrone Luther Hadnott] offered to take the girl home on his motorcycle.

The schoolgirl, he said, was walking with her friends and accepted Hadnott’s offer.

This is what happened next, according to police:

Hadnott took the girl to a house, and later to his car. They drove to a park where he allegedly attacked her. On her cell phone, the girl called her friends, who notified police.

Hadnott told authorities he only tried to push the girl down and kiss her. The girl disputed his claims, and police told CNN they intend to file rape charges.

Just as the “amazing” statistics indicate, this is hardly the first time a rape has been reported involving Marines stationed in Japan. As recently as October of last year, a girl accused four Marines stationed at Iwakuni of rape… that incident also happened to fall on the first night of the Sake Matsuri in Higashi-Hiroshima. In 1995, the rape of a 12-year-old girl by three members of the US military in Okinawa prompted authorities to reduce their presence on the island.