What does it take to be a runner? What does it take to run a marathon? You know all the people on the sidelines during races, yelling things like “go faster!” or every runner’s personal favorite, “pick it up!”? They only see the present. Yeah, at some level they know that you’ve obviously put some work into the race itself but just how much doesn’t exactly cross their minds; all they want to see is a show: a sudden burst of acceleration, an all-out war between two finishers, but the training itself… As John L. Parker put it, the Miles of Trials, or the Trial of Miles. Putting in the distance. Going day after day, raising the mileage, pushing your limits, and running not for the fun of it, but running to die. Being prepared to sap every last bit of strength that your body is capable of releasing, and using that to put one foot in front of the other.

“‘The marathon is a race of attrition.’ You’ve got to understand that. You’ve got to come to grips with that… No one really wins a marathon. You just survive it better.”

Unfortunately, no one can understand this until he or she actually goes through with it. Once a runner, always a runner. Once you get that kind of exercise pumping the blood through your veins, you find stopping or even slowing down is like amputating a part of yourself: the stamina and the speed are necessary things, as commonplace as eating and sleeping.

“Runners are much more in tune with the winding-down process… your average citizen these days isn’t that connected to the physical realm. Builders, farmers… In an older time, with say manual agriculture or hunting-gathering, you always knew how much less you could carry than a year ago. Or how much less you could ride or walk. Believe me, when dinner depends on running game to ground, you notice pretty quick when it starts to get harder… It happens with all athletes, but with us, with the endurance sports, everything is just too damned quantifiable… Modern civilian though, things happen too slowly to notice. Jeeminy, when did the basement steps get me wheezing? Am I old or just out of shape? And if you were never in shape, is there any difference?”

It wasn’t exactly the same in high school; yes, I was a runner then in cross country and long distance track, but I wasn’t really in tune with the life: my metabolism was slow, my frame was weak, and I tended to see more of the negatives than the positives (let’s face it, the cheerleaders tend to go to the football players rather than the track team).

Training for the Austin Freelance Marathon in 2005, however, I think I truly started understanding what it meant to be a runner. In a city like Austin, with a 10-mile trail jogging path being shadowed by the downtown skyline, running is life. I had a training group, a girlfriend who made me more aware of just how many miles I was putting in, and a goal: a three-hour marathon. My metabolism would forever be altered since that 30K in Buda, Texas at 2:05:53.

“…it’s the fever. That’s the thing. The fever that connects you to lovers and poets and rare-air mountain climbers and madmen and lost tribes.

…which is why, after all my experience, all my races, everything in my lifestyle… it was torture to be in the 2008 Tokyo Marathon and unable to cut loose due an injury.

Participants began arriving in droves from all corners of the world, making their way east of Shinjuku Station in the northwest region of Tokyo. Runners, one and all; lining the underground passageways beneath the Tokyo Metropolitan Government Building, cascading across the streets above. 31,000 men and women, running to run, some running to win. 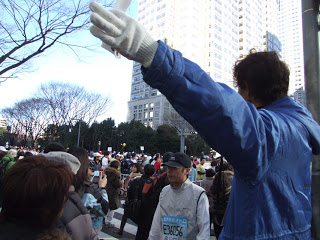 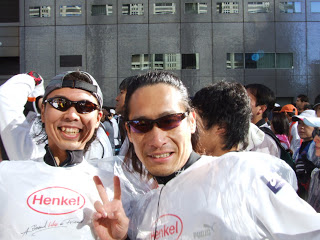 That day I was merely a civilian, camera in hand, my distinction marked only by my BIB section placement: I was a B, the second fastest group in the race. Though we were capable of matching wits with the A’s, endurance always wins out over speed. How to survive it better…

It was all coming back to me in a rush; at least in Kagoshima, I rarely see the competitive edge among recreational joggers and local 10Kers. But here, in the heart of Japan, we have some true 走者. Cutting through the cold air of the early morning when most choose to sleep. Stretching as a necessity for the long race ahead. Cramming in protein and double-checking the supply of energy packs and water. Striding out 100 meters and returning with smooth, fluid motion.

Although ordinary athletes and civilians complain about the distance involved, I had never been more tempted in my life to just cut loose, shatter my healing wrist, and at least try to run 26.2 miles to prove my worth. As it was, all I received were condescending “gambatte”s and “no! run!”s from the metropolitan crowd, as well as the occasional question “aruite?” (walking?)

Handing in my chip at the 5K mark to the puzzlement of the staff (I still looked dressed to run), I realized that I had never seen a race from this end; thirty one thousand people… and only a handful are running to win. Some aren’t even trying to race or push themselves. Yet… I have respect for the walkers, the slower runners. Behind the majority, with the cheering crowds reserving their applause for the lead runners, they really are going out alone for their own reasons. Some are just slow, some out of shape, some old, some injured, but they still go through with it.

Such is the draw of the marathon. Before running really took off as a respected competitive event, the 26.2 miles was really seen as a mystical journey, not easily finished, let alone in a decent time. Now, with runners coming in under 2:15 in most races around the world, the distance may not be as daunting, but the name and the history continue to bring in those who would challenge themselves in even attempting to undertake such a task, to become what people like Haile Gebrselassie inspire you to be…

Once a runner, always a runner.

This year, the Tokyo Marathon doubled as the Olympic Trials for the Japanese Men’s Marathon; probably why we saw so many Japanese contenders come in under 2:10.