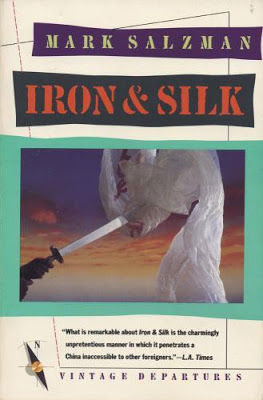 How did your experience in China change you?

I think more than anything else it made me realize what my Western identity was. I grew up wishing for many years that I could change myself, that I could become someone who was universal, that I could incorporate Asian culture and Asian philosophy into my own life to become a better person.

But when my teacher Pan did martial arts, he had total confidence, he was free. It was like seeing a bird fly. When I did it, it seemed put on, artificial. He said “Your problem is that you’re trying to be me.” You’ve got to be comfortable being you. The whole experience being in China was like that for me.

Learning about another culture doesn’t mean you have to reject your own. It allows you to see yourself from another perspective, see your good side and your bad side and appreciate what you have.

I first read this book as a required text in the 8th grade. Now, looking back on it from the perspective of an American who has also lived in Asia, I wonder why it was so appealing at the time. Granted, it is very well written and quite entertaining, but were there really so few insights into Chinese and Japanese culture in the 80’s? Nowadays, all one has to do is walk into a Barnes & Noble and spot at least ten travel narratives concerning teaching English in Asia.

In any case, he knows. And the lessons he learned can apply to Japan as well.

One more step towards disassociating myself with Japan. I have discussed how foreigners living and working in Japan for at least six months are eligible to get a refund on their Japanese pension when leaving the country permanently. The problem is, the amount refunded is based on the time in Japan, not the actual Yen paid. As a result, since my former employer took a few weeks to get me signed up for the pension, and I technically only paid into it for 11.49 months, I will receive only 40% the total pension payments, as opposed to 90% if I had stayed between 12 and 17 months. Isn’t bureaucracy fascinating?

But regarding the timeline…

October 14th, 2008
Receive notification that my pension will be deposited into my American bank account.

I was just about to contact the Social Insurance Operation Center in Tokyo at 81-3-6700-1165 and test my poor financial Japanese to attempt and learn the status of my application. Thank god that’s no longer necessary.

Approximately four months from the mail-in to financial results.

Now all that remains is to get that 25,600 Yen back as a tax refund by forwarding the refund notification to my designated “tax agent” in Japan (a process that involved enough paperwork and research in itself).

Questions about this? About to leave Japan yourself and want some money back? Email me

The US economists doing it like the Japanese, according to Jon Stewart: