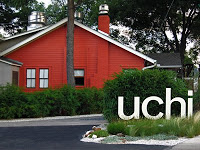 Uchi, a contemporary Japanese restaurant set just south of downtown, is truly like being back in Nippon. After being settled at the sushi bar and given an oshibori and a menu, I casually asked the waitress if the head sushi chef was Japanese. Indeed he was.

An Osaka man right in my own backyard. It turns out that of the five sushi men cutting the fish that night, four were Japanese and had been in Austin between 5 and 18 years, and the one closest to me was Thai.

(upon seeing my Buddha medallion from Nakhon Si Thammarat)
“それは何ですか？”
”これ。。。タイ国から。”
“Oh, really? He is from Thailand!”

Which followed me asking “khon tai mai?” (are you Thai?) and remembering some of my Thai phrases that had not quite recessed into useless memory. When Masa-san and the other Japanese heard me speaking Thai, the response was immediate: “smart! smart!” (日本語で) It took me a few minutes to stop from laughing and just explain to them that I had lived in both countries.

Masa-san’s (perhaps I should have called him Salo-san, but every Masamichi I knew in Japan preferred Masa-san) English was nearly perfect, but we persisted in Japanese for the rest of the night. He and the others even gave me a free sampler of some excellent fried sushi, which another customer apparently misordered. Thereupon I asked Masa if he could recommend the best sashimi for someone wanting to remember the tastes of Japan, and he suggested the salmon toro platter.

Wise decision. For $18, you get six slices of fresh salmon in a sundae glass decorated with leaves, ice, and seaweed. Fine presentation, and the taste was extraordinary. With the ambient Japanese, my oshibori-dampened hands gripping the chopsticks, and too much food for one man to handle, I felt as if I were right back in the heart of Kagoshima.

Cheers to you, Uchi of Austin, and I will be back.