I think I was in some small neighborhood onsen of Kagoshima the first time it happened. Although sento (regular bathhouses) are commonplace enough in the rest of Japan, this southern capital had taken it upon itself to fill every last public ofuro with volcanic bliss, powered by the overlooking peninsula-once-island Sakurajima. And it worked quite well; aging Japanese businessmen rest their weary bones in waters more soothing than any available in the urban sprawl that is Tokyo.

I too enjoyed lowering my body into the watery abyss, letting my face remain just above the surface to inhale the slightly sulfuric fumes of what had become my thrice-weekly indulgence.

And we talked in the bath, those Japanese and I. Rambled on about the differences in our cultures, debated which onsen were the best in the land, and tried to trick the other into moving into the current of the tenki furo (electric bath), to thunderous laughter. But more often than not, in my neighborhood hot springs and while soaking across the country, a question that nearly always came up was: “Do you have hot springs in your country?

I didn’t really have a good answer for those men; with the exception of Palm Springs and what I assumed were a smattering of geothermal springs in the Rockies and Sierra Nevada mountains, I had no idea of what calming soaks I could have missed in my own hometown. Are hot springs even possible in the central US, where evidence of volcanoes are thousands of years in the past, and unlikely to produce anything remotely similar to what one sees all over Japan?

In Japan, most of the springs are fueled by underground water sources coming into close proximity to magma or volcanic “veins” of heat rising to the surface. As these types of hot springs are usually superheated, many have to be regulated so as not to scald the bather.

Although some springs in the United States are heated in a similar manner, others are the result of geothermal heat: the deeper you go towards the center of the Earth, the higher the temperature of the rocks. Hot springs powered in this manner need to reach a sufficient depth in the planet’s crust to achieve any significant temperatures (enough for soothing baths, anyway). As volcanic springs are able to form closer to the surface and with much higher temperatures, I prefer their waters coursing through my skin.

My Google search led me straightaway to west Texas, more specifically Big Bend National Park, where an outdoor hot spring pool lay on the border between the great state and Mexico: the Rio Grande.

Mere walking (or swimming) distance from the closest Mexican village, the springs is remote by even Big Bend standards – just keep driving east until you see a sign; turn onto an unpaved road; be careful as the unpaved road forks and leads you onto a narrow and treacherous road; dismount and follow the signs, taking note of the trinkets (hiking sticks, wire scorpions) Mexican craftsmen have left with a small note requesting money; do your part and help border relations… the path across the river may have been muddied by 9/11, but we still both live with each other, side by side, each helping the other in times of need.

A little farther down the sandy path and you’ll come across the ruins of what was once the bathhouse, now a mere foundation used to prevent the water from flowing directly into the river. I must admit I was skeptical… but fear not, these springs are comparable to any seaside onsen in Japan; not quite up to the sulfuric taste of Ioujima, but definitely a close second to Furusato Onsen on Sakurajima. The hot springs at Rio Grande Village is recommended for its remote location, soothing waters, and communion with nature. Take a soak in the shadow of Native American pictographs and melt your troubles away in the Texas sun. Everything is bigger, better, and apparently more relaxing in Texas.

If you desire a little more privacy, drive about a hundred miles west to the town of Ruidosa, where the private resort Chinati Hot Springs lies. You may have to deal with runaway burros and adapt to the owner’s bloodhounds, but once you settle, you’ll find an excellent place to get away and soak under the starry night: no cell phones, no ambient noise, not even a car wheel turning.

The water at Chinati comes out at a mere 109 degrees, so it’s best to catch it quickly. You do have the benefit of a private bath. 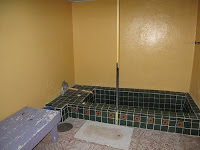 Next up… exploring the hot springs of New Zealand as I make it a habit to travel and soak. Remember, hot springs are best when the weather is chilly, so make the most of the time you have left.