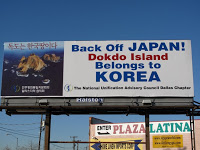 Japanese culture is all-knowing, all-powerful… how else can you explain the fact it keeps following me around in the middle of Texas? I was driving towards Dallas’ Koreatown and caught sight of a large sign boasting: “Back off JAPAN! Dokdo Island Belongs to KOREA”

As someone who has heard of some of the territorial disputes Japan has acquired over the years – islands north of Hokkaido with Russia, south of Okinawa with China or Taiwan – I must confess the first time I heard the name Dokdo was outside of Nippon.

Let’s review, shall we? The island is a little less than a square kilometer of rock, not far from the Oki Islands off the western coast of Japan and the Ulleungdo Islands of South Korea. South Korea does have historical precedent here, being the first ones to place the islands on a national map and giving them name. Japan admits as such.

However, following the Allied occupation of Japan after WWII, things get a little sticky. What MacArthur most likely did was relinquish control of the islands and, as a consequence, return them to Korean rule. But modern cartographers and politicians have taken issue with this, and everything following Takeshima (as the island is known in Japan).

On a side note, I have a sinking suspicion the sign was placed in this particular location for its proximity to a Korean restaurant named (surprise, surprise) Dokdo Island. And perhaps that is the best solution both sides can agree on: grab a set of chopsticks and start devouring the rocks until both Japanese and Korean citizens have an equal amount of territory in their digestive systems. It would still taste better than shirako