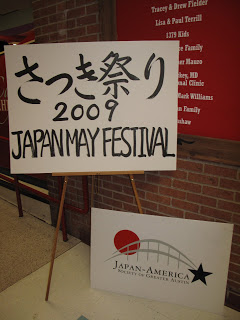 Apparently the city of Austin, Texas may be more influenced by Japanese culture than I had originally given it credit for. 9% of nearby Houston’s population is Asian and Asian-American (and it shows through the quality of food), and even though Austin has its fair share of sushi bars and exchange students at the University of Texas, it doesn’t exactly exude “Japaneseness” (Japanese population roughly 0.2%).

However, after seeing a notice at Whole Foods’ headquarters on 6th Street for a Japanese tea ceremony, I followed up on the sponsoring organization, the Japan-America Society of Greater Austin. JASGA also happened to hold an indoor festival this past Saturday, which promised to be a gathering of Japanese food, culture, people, even medicine. I had to partake. 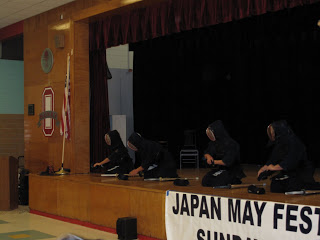 It was actually quite nice, though a bit stereotypical. There were the usual Japanese festival booths of catching the fish for kids, face painting, and our own American cotton candy. Tables displayed local Japanese-owned businesses ranging from consulting firms to private chefs (I may have to arrange for a gourmet obento).

And of course the people. My language skills have really gone down the drain as evidenced by my simple-minded phrases at the matsuri. Of course, I had the advantage of being in Texas, where most people know English, so the conversations didn’t exactly lag. I picked up a few businesses cards, including one for a decent shiatsu massage, missed out on some Osaka okonomiyaki (I like Hiroshima style anyway… those noodles and cabbage really make it good), sipped some green tea, and ate some mochi while watching a kendo demonstration. Good times.