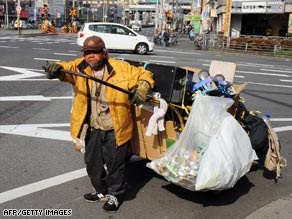 CNN recently reported on a record fall in the Japanese economy: a 4% drop in the last quarter, and similar statistics all very impressive to get the point across. Apparently, from reading this article, Japan is doomed. But when facts and numbers just won’t suffice, why not throw in a picture?

In this case, CNN chose one of the least likely scenes one would see in Japan: a raggedy homeless man toting a misshaped cart of cans and junk in the middle of the street.

Now, there are plenty of homeless people in Osaka, as there are in many Japanese cities: Tokyo, Fukuoka, Hiroshima, Nagasaki (didn’t see too many in Kagoshima, though). But what you have to remember is they are still Japanese! Japanese homeless exhibit a behavior all their own; if you were to see one walking down the street it would be unlikely you’d recognize him as homeless. Shoes are taken off outside sheet metal and cardboard shelters. Meals are readily available, as the standards of freshness force shopkeepers to toss out new bento boxes and baked goods in less than a day. With baths available in cheap onsen and sento, hygiene isn’t exactly a big problem, either.

And there’s the Japanese part of them not wanting to stand out from the crowd. They know they’re living on the streets and must eventually return to a makeshift shelter at night, but that doesn’t stop many from bathing and shaving in the morning, donning clean clothes (I have heard of some wearing full suits to mix in with salarymen), and taking their place in Japanese society as a glorified extra in a movie – part of the background, blending in with the masses perfectly.

The point being, even with a homeless population like Osaka’s – and yes, there are a few homeless who walk down the street with unkempt clothes and a cart – this photo is not a typical scene in everyday Japan, nor is it the likely outcome with a steadily falling GDP. I though CNN was exempt from a lot of the bias and poor tactics to sell news other organizations use, but apparently not.