Footage from NHK on board the cruise in southern Japan:Shoganai is far from the only expression that sums up a culture in ten words or less. Take a look at how cultures from around the world define themselves in my latest article.

“It can’t be helped.” Japan is for the most part a very non-confrontational culture. Shoganai epitomizes this tendency because by encouraging people not to complain or try to “fight the power”.

Circumstances can’t be changed, so why get angry or try to avoid the unavoidable?

It’s too hot and you have walk 10 km to the nearest train station? Your boss asks you to work an extra four hours that evening?

Just accept it and move on: shoganai.

My most recent read is Born to Run by Christopher McDougall. In it, he explores the phenomenon of ultra-long distance runners, running races most renowned track coaches consider “somewhere between competitive eating and recreational S&M”.

Cute but fair. I admit I’m one of the many to poke fun at these ultramarathon athletes; not so much disparaging their abilities, but their sanity. I can run 26.2 miles, but who in their right mind would want to go 100? On foot? Over hazardous terrain?

Since I left New Zealand, my running has slowed down in a way I never wanted. I assumed that since I returned to the states, with its ample supply of Whole Foods’ stores, ‘crazy’ runners, and shoes my size, that I’d have everything I need to carry on building my distance a piece at a time.

Instead, I felt as though I were just going through the motions of running… still finding it a welcome release at the end of a workday, but more of an obligation rather than fun. Yes, fun! Running is supposed to be fun. I wrote a blog on my Matador account a while back after spending some time in a water park in Kiwi country and getting chased by a few kids some days later. The point being, running was fun as a kid. The thrill was in the chase, not the need for speed workouts, distance building, or always staying on the straight path. Running over rocks, jumping on benches, randomly changing direction, and speeding up and down as you see fit, not part of a grand workout scheme.

McDougall understands this all too well when he unearths the secrets of some of the greatest ultramarathoners on the planet; these people aren’t concerned about stress fractures, making good time, going for fame and glory (how many ultras do you know by name?) – it’s all in the love of the run. Those who experience the race just like a child sprinting to the top of a jungle gym are inevitably the best suited for the long, long distances.

That’s how I feel. Running marathons has been challenging, don’t get me wrong, but I feel more comfortable with going a nice and easy pace over an insane distance. Back in college, 26.2 miles was just insane for me, but now I’m not so sure. I want to appreciate the run like the Tarahumara: training without concern for pace or distance, running not for release or necessity, for for pure enjoyment. Imagine that, if you will… some of you probably believe you do run just for the enjoyment. That’s entirely possible – but is it always true? Do you ever feel like you just want to get outside and go an easy ten? Then reward yourself with another?

I think I do. So I tried an experiment. Night runs have always been fun for me when I’m in a big city – I dart in and around both lanes of a major road, causing motorists to honk and those sitting on their porches for a late night drink to stare in awe at the crazy runner. This time, however, I cut loose. I didn’t go as fast as I possibly could have, but I kept the pace that was comfortable to me and let my inner child take the reins.

When I came across benches, I jumped up and ran right across them.

When I felt like it, I yelped and hollered to the heavens.

When my arms needed to move, I raised one up, lowered the other, and moved like I was one of the kids in the 1920’s who saw the first airplanes.

I didn’t limit myself to the road, or even sidewalks alongside them. Where there was an interesting path, I took it. When I wanted to explore an area, I zoomed right in.

The result? It actually was a fun little run. Now just to hang onto this feeling, and let it flow through me for the next series of long runs…

World Hum has just released a great article on a foreigner living in Japan and the “contradictions” that result. Here’s a sample:

…the Japanese tend, I believe, to think in images rather than in ideas, and where ideas need to be consistent, images can sit side by side, belonging to different worlds, like parallel lines in a haiku. It’s not uncommon, near where I live, to see a Zen abbot stepping out of a late-model Mercedes, on his way to his favorite bar in the red-light district. In Europe, such behavior might be seen as hypocritical; in pragmatic Japan, a Buddhist priest will perform every last rite demanded of him at funerals and ceremonies immaculately—like the Platonic image of a Buddhist priest; but when he is finished, he will go home to his wife and children, and pop open a beer in front of the baseball game on TV. He’s played his role, he’s allowed to slough off his robes.

I meet all kinds of people on the road and in my line of work. Most recently, I was introduced to a Swiss citizen living in America. As we started talking, I slowly took command of the conversation and switched the focus to Japan (naturally). To my surprise, however, her impressions of Switzerland seemed to me as if its culture and that of Japan were one and the same.

– Both the Japanese and Swiss have similar attitudes to the working environment: being on time to a fault, staying extra late, not indulging in vacations or long breaks, and examining the individual when it comes to forming a working relationship, as opposed to the company as a whole.

– Both tend to be very reserved in conversation and appearance; not being rushed into decisions or relationships, instead trying to find firmer ground.

In addition, the language barrier plays a large part in both cultures; although you are likely to get a more receptive audience speaking the native tongue in a country, in Japan (and apparently Switzerland), these barriers are much more defined. Not knowing Japanese in Japan is like being shut out of everything that makes the country what it is (English is good for the tour groups, in other words).

I guess I now know where to go if I visit Europe.

I just received this email from a representative of the website Tripbase:

After careful consideration, we have elected to give your blog an award for providing one of the best Japan/Travel-related blogs out there. You have emerged in 10th place for this category.

We feel your blog is an excellent example of what a blog should be and trust that you feel proud in this respect. We congratulate you on your achievement and are providing you with a badge to display proudly at your own discretion on your blog as a sign that you are in the top echelons of the blogosphere.

Not bad for a guy who left Japan last year. Cheers to Danny Choo for making the number one slot and getting featured on Forbes. As a side note, I must say The Nihon Sun has established itself as a top Japanese blog fairly quickly – kudos. 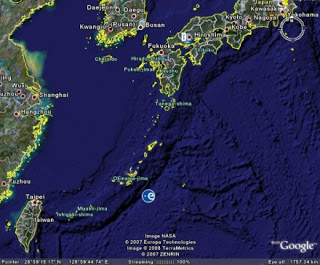 I’ve been considering looking at employment in Taiwan following my adventures in New Zealand. Why, you might reasonably ask?

– Japanese hot springs are available (due to the occupation)
– Chance to learn Japanese history from the other side of the equation
– Island nation
– (Hopefully) access to really remote Japanese islands
– A quasi-Japanese culture (effects of occupation, similar Chinese influence)
– Cheap to live, decent salaries for foreign workers

– Pollution; anyone know how bad it is?
– The world of grey, i.e. endless cityscape, fewer rural places
– May be too crowded even for me

Thoughts from readers? Anyone happen to be in Taiwan now?

I haven’t been posting Japan-related blogs nearly as often due to my hectic schedule in getting my new website, Once A Traveler, up and running. I will depart for New Zealand in September to spend another summer there, and hopefully find a job in northern Honshu or Hokkaido beginning January or February 2010.

In the meantime, if you have any ideas about what you’d like to see in a travel blog/website focused on Japan, don’t hesitate to leave them in the comments of this post. I do have my own vision, but would welcome any suggestions.

I never realized just to how much of a degree my Japanese language skills have fallen until this evening. I was doing my usual search of the best domestic Japanese restaurants based on the quality of their otoro (fatty tuna) nigiri; this took me to Koi Sushi Japanese Grill and Aki, the sushi chef from Tokyo, who three months ago was working at a Benihana in San Diego.

Aki-san and I went through the usual grievances of being away from Japan for so long:

– Lack of a decent hot springs’ bath
– Not-so-fresh fish
– Few Japanese people
– No trains (at least not ones that work well, anyway)

But what surprised me most was how much I really had to question myself as to what I was saying in Japanese. The words no longer flowed instinctively as natural conversation or even a list of set phrases. Instead, my mind was going over each work one at a time, until it “verified” which ones to use. I was wrong half the time, and couldn’t help it.

Nevertheless, the conversation was a breath of fresh air after having been away from Nippon from so long. We discussed life in the states vs. that of Japan, went over the various foods foreigners are not likely to ingest – natto, shirako, etc. – and even got as far as the practicality of long distance relationships; Aki-san’s wife was still in Tokyo.

The only way for me to improve is to get back over there. Come January, maybe.