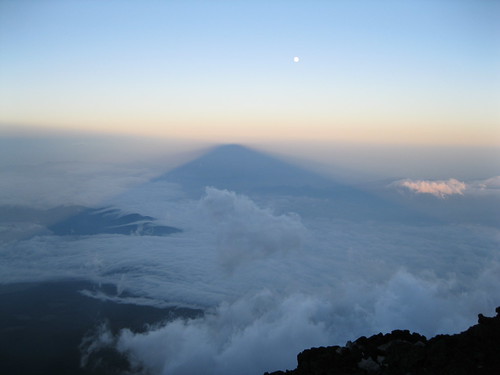 I’m walking down the Subashiri Trail on the east face well after the sun has set. Unlike knowledgeable hikers, I hold no rain gear, nor a decent flashlight; fortunately, I planned my ascent around the full moon, and, being a clear night, this light is more than enough to guide me. My feet slide across the loose volcanic surface. For some reason, I imagine a fall to be nothing worse than a deviation from a slip n’ slide water machine… the lie is better for me, truly knowing that one false step could lead to scraped hands or worse. Less than eight hours ago, I had been cautioned against this undertaking by none other those working in the tourism industry of Gotemba; how could they be so wrong? The skies were clear, the surface dry, the view one of a kind.

Two years in Japan, and I never found myself hiking to the top of Mt. Fuji. It was always one reason or another: I didn’t want to go during Obon in August, which was sure to bring lines of people all the way to the summit; nor was I entirely sure how safe it was just outside of the climbing season, in June or September. I had previously concluded that the best time for someone in good condition and pretty independent was mid-late September. The crowds would be gone, a few mountain huts would still be open, and, unlike June, there would be a lesser chance of rain.

This was my thinking as I took the train into Gotemba Station without much of a plan; I didn’t know which trails would be open in September, if I needed a reservation for the few mountain huts that would be open, or if I could even stock up on supplies at the 5th station. Tourists generally start their ascent of the famous Japanese icon in stages: from the 5th station, where most buses run, to the 6th-9th stations for food, lodging, and medical care, to the summit, the 10th station. All I knew for certain was to have plenty of cash and water on hand.

Equipped with my best mountaineering Japanese, I walked into the tourist information booth direction across from the train station. Unfortunately, I knew there would be trouble before I even started. For many Japanese, if something doesn’t happen a certain way, it just doesn’t happen:

– You were stung by a jellyfish? No you weren’t! Jellyfish season ended yesterday.
– We can’t turn the heater in the office on yet! I don’t care if it’s 10 degrees, it’s not October 1st yet!

This is a bit of a generalization, but, judging from the reactions of the staff when I told them I wanted to climb today, I’d say it’s not too far off; they acted as though they would be the last ones to see me alive. There was some information they couldn’t withhold, namely that the only bus running to any 5th station from Gotemba was to the Subashiri Trail. The others had stopped in early September. And although the staff were capable of making arrangements for the mountain huts during the official climbing season, in the off season, they were astonishingly ignorant. I asked them which huts would be open on Subashiri, only to be told none were. Then I said I knew at least two were (Taiko-kan, 大陽館 and Osadasanso, 長田山荘), whereupon they spouted: “Oh, you knew that?” Ummmm… yeah…

It was almost funny. I mean, I understand them wanting to be concerned for the safety of those ignorant about climbing in the off season (high winds, snow, etc), but I was prepared, and I knew what I was talking about. They didn’t even know which huts were open, and for the official tourism office, that’s pretty sad. The reaction to my presence at the 5th station, however, more than made up for anything I felt at sea level.

If you are considering climbing Mt. Fuji, you should know there are four official trails to the summit:

1. Fujinomiya Route (富士宮ルート). Easily the most popular and most equipped for emergencies and less-than-perfect climbers. Also has the lodging closest to the summit (Mannenyuki-sanso, 万年雪山荘), if you want to see both sunrise and sunset.

2. Gotemba Route (御殿場ルート). I originally wanted to do this one until I discovered the buses to their 5th station had stopped running. Gotemba is usually less crowded than the other trails because it starts at the lowest altitude.

3. Subashiri Route (須走ルート). The subject of this blog entry. If you’re looking for a bit of a forest hike before you want to be surrounded by nothing but lava rock, go with Subashiri. The biggest gap is probably between the 6th and 7th stations. 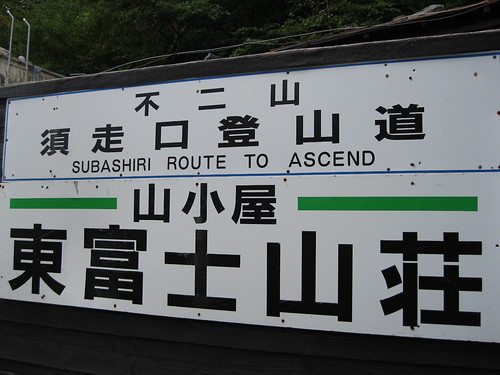 4. Yoshida Route (吉田ルート). Like Fujinomiya, this trail is ideal for tourists with modern facilities en route. It runs up the north face of Fuji-san.

I was rushed getting out to the bus stop: the next bus left at 11:00, and the one after that, not until 1:30. It was a quarter to eleven: fifteen minutes to separate my luggage, stash everything I didn’t need in a coin locker at Gotemba Eki, and buy as much water as I could (didn’t want to pay absurd prices on the mountain).

The bus takes you way up there, rising about 1400 meters and well past the first layer of clouds. Don’t get discouraged if it looks overcast. Fujisan is a HUGE cloud-catcher of a mountain; one minute it may be completely surrounded, the next… clear skies.

At the 5th station, I was pleasantly surprised to see enough activity to warrant the two shops being open. Though I was less thrilled to discover the price of water had doubled, and bathrooms had gone from free to 200 yen:

A few interesting characters here: the obasan (grandmother) in charge of one of the shops was quick to offer mushroom tea to any climber, including myself. She was also quite helpful in answering my questions:

“I’ll probably stay on the mountain tonight. Will it be safe?”

“Of course. There might be a little rain… but no problem.”

“What if I don’t have a reservation, is that a problem?”

Now that I was among people who actually devoted their lives to Fuji-san and climbing, people much more in tune with the moods of the mountain, I was given anything but discouragement. Even ran into a famous Kendo instructor, Ajiro-san; he told me to throw his name around Korea and see if it opened any doors for me. Just might – I do have his meishi. In any case, the Subashiri 5th Station is a great place to relax with tea and ice cream before or after a climb. I timed my arrival so I could adjust to the altitude over a short lunch before my ascent.

Between the 5th and 6th stations, the quiet was very unsettling for me. There was still greenery all around me, so I was a little confused (hadn’t read up on the topography of this trail): was I making good progress? It wasn’t until I caught sight of a fabric fish waving in the wind that I realized I was a good twenty minutes ahead of the recommended time. Ordinarily, I’d be quick to just ignore that “suggestion” and go at my own pace, but it’s good to give yourself time to adjust to the altitude, especially on the highest peak in Japan. Prices on everything have doubled at the 6th station (六合目), but they do offer noodles, water, tea, and lodging. I’m warned by the old timer running the facility about going too fast, but I couldn’t really appreciate what he meant (not until later that night when I found myself with a killer headache).

Shortly after departing, the plant life became less frequent along the trail until I could notice some nice lava flows. Steeper and steeper, or at least it felt that way to me.

I didn’t have time to appreciate the 7th station too much. It looked like a pretty good setup considering the altitude. Meals are available for outrageous prices (¥550 for a Pepsi), but the staff are nice and English-friendly. 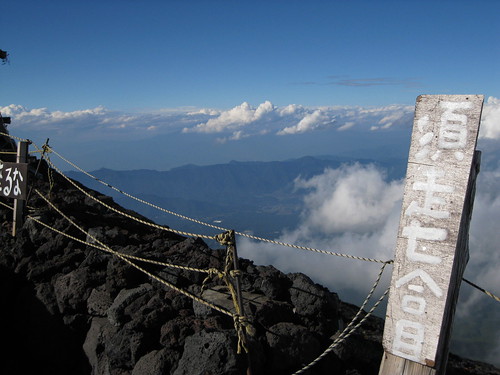 Nothing but pain from here on. I left the 7th station around 3:30, which gave me a little over three hours to the top according to the official climbing guide. Unfortunately, that station had the last available lodging on the mountain, leaving me with two choices: sleep outside one of the closed mountain huts close to the top OR climb in time to see the sunset, then hurry back to the 7th station to rest for the night. I opted for the latter, but that meant me keeping a pretty good pace the rest of the journey.

I won’t even begin to say how difficult it was… actually, not too bad, but I wouldn’t recommend it if you’re not in decent shape. The sun had already “set” over my half of Fuji by the time I reached the last set of steps:

To be greeted by an overly enthusiastic crowd at the highest torii in all of Japan: One of the reasons to climb to the summit at sunrise or sunset is to catch the conical shadow over the blanket of clouds. Fortunately, as I had ascended the east face and was in time for sunset, it was a perfect sighting:

I couldn’t stay for too long, though, as I had to make use of as much daylight as I could to return to the 7th station (assuming I would even stay there). You might think me crazy, but my plans were still flexible; I was considering Taiko-kan as one option among many. By the time I did risk my life more than once in that moonlight descent, I was ready to call it a night, and enjoy an evening with the fringe of Japanese society. These are guys who could describe what breathing techniques I should use to combat altitude sickness IN ENGLISH. Guys who spend months of the year out of contact with the world (pre-recorded TV, no internet obviously). The managers of the 7th station. I salute you. 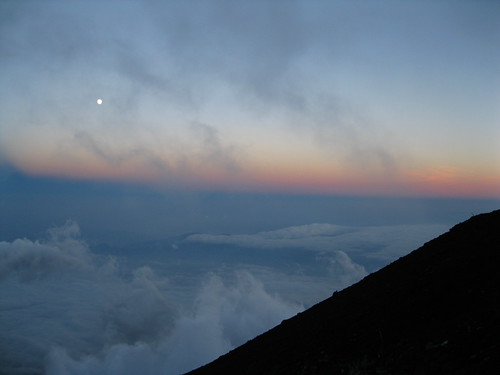 Oh, and want to talk about fortuitous timing? I just missed the snow

Water is a commodity on Fuji. Unless you want to end up paying ¥500/bottle, I suggest you bring 4-5 liters from town; food is also a good idea. This applies to bathrooms and washing up too.

I found this video by StreetEnglishTV on an off-season climb up the Yoshida Trail. I stand behind what I said concerning a September ascent, but I’m also glad I was “forced” into going up Subashiri; Yoshida just seems way too developed.