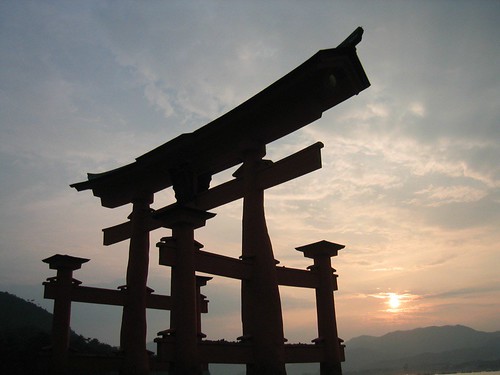 I began my morning at the same time one would expect a Tokyo salaryman to rise. But he would gaze upon grey buildings and the same morning commuters ambling to Shinjuku Station, whereas I was surrounded by mist and fog. Far from Tokyo. From any large group of Japanese. There had been only one option to sleep as I stumbled down Subashiri Trail, using only the moonlight to guide me, and that was my current resting place, Taiko-kan.

Many climb Mt. Fuji for simply the experience, as those who do reach the summit are members of yet another in-group in Japan. Others, like those avoid the crowds by climbing in the winter, are veteran mountaineers, some of whom might enjoy running the mountain huts during the summer months later in their lives.

As for myself? I just wanted to get my legs good and sore, my skin sticky and salty, in preparation for the relaxation awaiting me just north of the Izu Peninsula.

I can’t help but wonder why foreigners come to Japan in the first place if so many don’t even bother to get off the beaten path. I know everyone has their own interests and perhaps limited time, but why do I only hear stories of visitors sticking with Tokyo, Kyoto, and sometimes Hiroshima and Mt. Fuji? Is it because they worry of using transportation other than trains, with the relatively cheap Japan Rail Pass? But anyone with this pass can take the shinkansen to Okayama and catch a number of local trains into Shikoku, a land of Buddhist temples, the oldest running hot springs in the country, and even Iya Valley, the rural home of Japan scholar Alex Kerr, in the time it would take to reach the floating torii in Hiroshima Prefecture. Why then do they always go to the modern high-rises and pachinko parlors of Tokyo, the traditional temples of Kyoto, the Peace Park in Hiroshima, and say “I’ve experienced what Japan has to offer”? Even Kerr has made this point: tourists fly thousands of kilometers, take the train for hours to their destination, and when an opportunity arises to go somewhere off the beaten path, the typical response is “but it’s so far…”

Or maybe it’s not an issue of distance but one of comfort; the accommodations have already been arranged, the closest bar serving gin and tonic located. Why go to the trouble of looking for something else?

To them, I would say: why in the world did you come to Japan in the first place? To see the source of the photographs in every guidebook ever published? Let’s let Google be the test, shall we? Do an image search for “japan”, plain and simple. What comes up? A map of the country, obviously, the streets of Tokyo, temples of Kyoto, geisha, trains, Mt. Fuji, the floating torii of Miyajima, and cherry blossoms.

If you come to Japan in April, cherry blossom season, that is the itinerary of the majority of foreign tourists: land in Tokyo, ogle the bright lights, take the train to Kyoto (passing Fuji on the way; easily spotted from the shinkansen), bus it to Gion, and hopefully spot a geisha. Maybe some will make the trip to Hiroshima – only two hours from Kyoto – but by and large, these two cities get all the attention, even among foreign residents.

There are some places in any country that draw in locals more often than tourists. Of course travelers want to experience aspects of a different culture, but when it involves more than looking or buying a ticket, some just don’t stretch themselves. Take hot springs in Asia, for instance. Communal bathing is a huge part of the lifestyle in Japan; in some small towns (and island communities), the best way to socialize is at the neighborhood bath, not the bar. Seeing a father scrubbing down his young son. Letting the stress of a hard workday melt away in the near-scalding waters. But many westerners I’ve spoken with are opposed to the whole idea; they like their private showers and hiding their “shame”; unfortunately, I do think this stems from repressed Christian ideas instilled in these non-Asian nationalities (even if it isn’t the dominant religion, the idea sticks) – showing your nakedness to another is seen as sinful. Or maybe it’s just something else entirely.

The source aside, the fact remains no Japanese or Korean I have ever spoken to has a problem when I suggest an outing to a public bath or hot springs. In Japan, there are areas rife with mineral waters and upscale accommodation, a refuge for couples looking for a romantic getaway.

Take Hakone (箱根), just north of the Izu Peninsula. Less than 100 km from Tokyo, this place offers the perfect escape for international tourists and Japanese alike: views of nearby Mt. Fuji, full of hot springs ryokan (lodging), and anything but an urban environment. A limited express train called the “Romance Car” (ロマンスカー) leaves from Shinjuku Station several days a time, a testament to Hakone’s popularity with those seeking a little privacy.

But even foreigners who aren’t traveling in pairs should take an interest in this side of Japan. A place that isn’t so worn down by tourism like Kyoto that you might actually have to *GASP* practice a little Japanese from time to time, but still boasts English signs if you run into any serious trouble getting around. The image I want you to associate with Hakone is popular and traditional. A place many Japanese know as a good hot springs resort, yet whose name just doesn’t resonate with most foreigners; you’ve all heard of Mt. Fuji (富士山) and the climbers it attracts, but have you any idea where Mount Takao (高尾山) is, a popular outing for Tokyo residents?

It all boils to the image of these attractions: you read about Hiroshima and learn of the floating torii and things to see around the city… most Japanese have a difficult time separating this name from any memory of the atomic bomb. You hear anything other than “Tokyo”, “Kyoto”, or “Fuji”, and it ceases to form any kind of image based on what you know of Japan.

In my mind, there will always be the experience of staying at Kiritani Hakoneso (桐谷箱根荘), a hot springs ryokan on Mount Hakone that took me in after a long day and night of climbing Fuji. Eating a full Japanese dinner in a private room with shamisen music playing in the background… I love how the Japanese separate each dish so you don’t mix one food with some undesirable flavor. I love how such resorts are designed for comfort, with amenities like shiatsu massages, a full karaoke booth, and yukata provided to lounge around your room and dining area.

And the focus of it, the purpose for creating such a oasis of luxury on this mountain? The bath. Always the bath. On Hakone, the waters are milky white from the mineral content with just a slight smell of sulfur to clear your sinuses. Flowing from the earth at 44 degrees Celsius, these waters cleanse you, in both a physical and spiritual sense. Time it right, and you should be able to manage five immersions before checking out the following day. 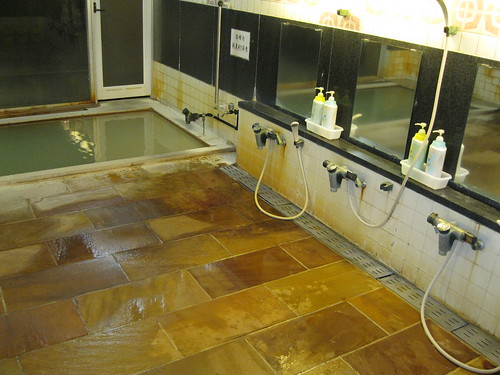 A series of twists and turns. By train, take the local or shinkansen to Odawara Station (小田原駅). From there, take the Odakyu Line to Hakoneyumoto (箱根湯本). Switch to the Hakone Tozan Railroad; this will take you past three switchbacks up the mountain until you arrive at Gora (後等). From there, either walk north or take the Hakone Tozan Cablecar (ケーブルカー) to Koen-Kami Station (公園上). Walk to the right of your direction of travel after exiting, then wait for the first “street”. There will be signs marking Kiritani Hakoneso; turn left. Walk about 100 meters uphill and it will be on your right.