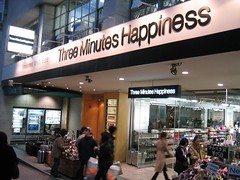 Four years ago I was doing pretty much the same thing I am now: staring at my computer screen and contemplating life abroad. The difference is, I was fresh from wrist surgery at Imakiire Hospital in Kagoshima, having shattered my distal radius in December 2007. How could I possibly feel nostalgic for such a time, when I was facing my own mortality for the first time ever…?

That cycling accident had been my first serious injury and the first time under the knife, and yet, I saw it as an opportunity (not just in retrospect, but at the time). I took the chance to slow down, read some running books, and blog on Japan more often. In doing so, I finished the majority of texts that had been sitting on my bookcase for many months, discovered barefoot running, and took the time to reflect on my days in Japan.

The truth is, I do miss Japan now… and I don’t. I don’t miss the bureaucracy of teaching at AEON, and being pointed at and ogled. But I miss the hot springs. I miss the safety of the country. I miss finding new adventures. Sadly, even if I were to fly back into Narita, it wouldn’t be the same. There’s only one first-time Japanese experience for everyone, and I’ve had mine. It was delightful, but the awareness it produced stuck with me, and I’m now more world weary than I was in 2006.

One thing I do miss about Japan is teaching. Not the steady paycheck or the simplicity of the job, but the students. Just like Loco in Yokohama, my soul is healed by children. It’s impossible not to feel better about yourself standing in front of a group of ten wide-eyed ignorant minds whose loftiest goals are to laugh and eat dinner. When I left AEON in 2007 I wanted something more professional, more stable. I found SNBL in Kagoshima, and it worked out… for a time. I missed the classroom, and the interaction. So I left for Thailand to try educating some different nationalities.

I’m tutoring children in San Francisco too, but it’s just not the same. My kids here are so distracted, so angry, so unconcerned about what I have to offer them. For me, it all comes back to Japan, when I was faced with that first group of Japanese college students and got a taste of what it was like for them, facing an unknown foreigner. I reveled in it.

Is this all one massive ego trip I’m describing? Perhaps, but don’t I have the right to choose a profession that would allow me to feel better about myself? Teaching in Asia does that more often than not.

More of my time has been spent checking out new Japan expat blogs and remembering what it was like, to be fresh off the boat and new to the world of the rising sun. Truthfully, Japan may be my favorite place in the world to live, even as an eternal outsider. The safety, the job, the food, the people, the adventure, and the language… all are factors pulling me back across the Pacific. I just hope I can find circumstances that will allow me to go back.