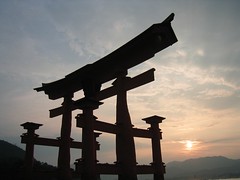 I’ve been offered a teaching position in Gunma Prefecture northwest of Tokyo and am considering taking it. Japan has loomed so large on my mind for years, and it seems like a good opportunity. Gone are the days when you can be sure of getting a job abroad simply for being foreign or racking up thousands of dollars each month for private lessons.

I guess to answer the question of whether I want to return needs some explanation, for myself and my readers. I was always fascinated by Japan growing up in the US; as the creator of Nintendo, the country provided material for my imagination. It should come as no surprise that void was filled with stereotypical images like ninja (seriously, how many ninja movies came out in the 80s?), sushi, and robots. A similar opportunity to interview with a private language school called AEON just after I graduated, and I took it without much hesitation.

The two years that followed opened my eyes. Not only was Japan my first experience truly living abroad and being cut off from a support network, but it awakened my traveler’s spirit and provided endless inspiration for writing. When I left in 2008, I was definitely ready to go, but I left a massive list of things to do behind. Uniquely Japanese experiences have been floating through my mind ever since I stepped off that ferry into China. Sure, I was able to hop a ferry and fly from Korea to finally climb Mt. Fuji and volunteer after the tsunami, but these were isolated experiences, and not enough to get me back into the mentality of an expat living in Japan.

Why should I go?

Being abroad stimulates me. Gives me material for writing. Provides an environment with delicious food, new places to run, and in this case hot springs. I can finally connect with J-vloggers in Tokyo. I’d be able to cash in my frequent filer miles on United and get a first class international ticket; that has always been high on my list.

Teaching provides an excellent creative outlet. I’m not saying there aren’t disadvantages to ESL in Asia, but the chance to heal my soul by being in socially acceptable situations with children is definitely appealing.

Being in Japan would bring things full circle and perhaps provide greater motivation for my book. I could look back as I write about my first time in the country and remember those feelings as I go about it again in a new city. I would be forced into a healthier lifestyle with the Japanese diet and regular soaks in onsen (apparently, Tomioka is a good area for them).

Why should I stay?

Teaching is a dead-end profession in Asia if ever there was one; in my experience, schools are incentivized to search for fresh graduates to keep salaries low and provide fewer ripples with issues like additional benefits and – if I may go conspiracy nut on you – prevent foreign residents from sticking around.

However, that’s not the real reason holding me back from going. Japan would bring my life full circle, but it’s very immature of me to consider going in circles rather than moving forward. Teaching abroad isn’t a career path, nor is it likely to yield lasting relationships. Having already lived in Japan, the second time around wouldn’t be as stimulating. I might find that the thrill wears off after a few weeks, if not days, and I’d have invested in an opportunity that wasn’t worth the time. In addition, and this is just entitlement talking, the school doesn’t offer severance after completion of the contract or incoming or outgoing airfare. Maybe that’s become standard for Japan these days, but it is a little disheartening.

I’ll let you know what I decide soon. I have to give an answer by tomorrow. As for alternatives, I can still fly into New Zealand for a few months, or stick around San Francisco with work assured until the end of the year.